Historically, strategic infrastructure investments have altered the trajectory of a country’s economic and social development.

From America’s Hoover Dam to Dubai’s international airport, infrastructure can transform people’s path to prosperity and propel entire nations to the global stage. I firmly belief we can achieve the same for Africa. It only takes leadership.

Whether it is connecting people to new opportunities through broadband, providing improved electricity access using renewable energy, or reducing geographic divides with world-class airports, investments in 21st century infrastructure have the potential to transform prospects and growth across the continent.

The disruptive power of infrastructure goes a long way. In 1935, US President Franklin D Roosevelt’s government invested $49million in the Hoover Dam (roughly $840m – or R12billion – today) and it took 5000 workers five years to complete. Today, it provides water for 25million people and hundreds of thousands of hectares of agricultural land, and provides electricity to roughly 8million people.

Major cities like Los Angeles, Las Vegas, San Diego, and Phoenix would never have grown as prosperous or strategically important without the Hoover Dam. And, California definitely would not have become the 7th largest economy in the world without it.

As Harith General Partners, together with our partners across the continent, we have made strides over the past 10 years in building a modern and well-developed Africa we can proudly bequeath to future generations.

Our investments are targeted at strategic sectors that are aimed at propelling African economies into higher growth trajectories. Our investment in Main One Cable is one such investment. It’s aimed at fuelling the rapid growth of broadband and internet access and had a particularly profound impact on West African countries. The 7000km submarine cable has connected Nigeria, Ghana, and other countries to the rest of the world and served as a catalyst for broadband and connectivity.

Main One has helped to reduce the prices for international connectivity services by 80percent in Nigeria and Ghana. The social impacts of this are immense, with thousands of jobs being created and injecting a necessary boost to the ICT sector in these countries, with positive impacts on economic growth.

The sheer scale of the opportunity for investment and related challenges in Africa will require a collaborative effort between private investors, governments and development finance institutions.

Collectively, these partners will need to invest nearly $100bn annually over the next decade to fully reap the benefits available in the power, transportation, telecommunications, water and sanitation, and irrigation sectors.

Central government investments continue to ground much of the continent’s infrastructure development, contributing roughly $30bn needed each year for the maintenance of existing infrastructure.

However, public spending levels overall remain far too low to meet the region’s rapidly growing infrastructure needs. Given this, the private sector will continue to serve as a major player in filling the funding gap and reaching spending targets.

Importantly, while the need for investment is large, the potential return is also very attractive on a risk-adjusted basis. Compared to other developing regions, the growth potential in sub-Saharan Africa is even greater.

Approximately 40percent of the region’s population lives in landlocked countries, and many economies are largely isolated from global market centres. Investments that help these less connected economies overcome geographic disadvantages, lower transportation costs and engage in trade, will open up new opportunities for millions of people living across the continent.

Bridging the quantity and quality gaps in infrastructure could increase gross domestic product per capita growth by 1.7percentage points each year, excluding South Africa. For lower-income countries in the region, the power sector offers the largest potential gains, while lower-middle-income countries could see particularly large gains from transportation sector investments.

With the assistance of our anchor investments such as the Government Employees Pension Fund and support from the African Development Bank 10 years ago, Harith was able to take risks and pursue a pan-African vision of infrastructure investments.

At the heart of my decision to pursue a pan African infrastructure investment vision was inspiration from former President Thabo Mbeki’s African Renaissance vision, which reignited Ghanaian President Dr Nkwame Nkrumah’s One Africa vision in the 1950s. Nkrumah recognised that Africa’s infrastructure is, to a large extent, a legacy of arbitrary borders and transport networks designed to feed former colonial powers.

Hence it takes up to 28 days for a rail shipment from Durban to reach Malawi. It is easier and cheaper to ship goods from Lubumbashi in the Democratic Republic of Congo to Durban than through the DRC port of Matadi. The continent is littered with such examples. The most expensive infrastructure is the infrastructure you don’t have. It is impossible to calculate what growth is lost due to the absence of good quality road or rail networks.

While the US leap-frogged from a primitive agricultural economy to the world’s industrial behemoth in 200 years, Africa’s trajectory is likely to be even more surprising given the advantages of telecommunications and steady advances in education.

With political stability and good governance gradually taking root in many African states, the environment is ripe for both continent-wide and global capital to flow into our shores and, turn Africa into a permanent construction site for mega infrastructure projects to propel the continent into a higher economic growth trajectory.

Tshepo Mahloele is the chief executive of Harith General Partners with assets under management north of $1.8billion. 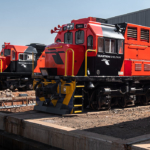 Traxtion
Scroll to top
Our website safely and securely uses Cookies to give you the most relevant experience by remembering your preferences and repeat visits. By clicking “Accept”, you consent to the use of ALL the cookies.
Cookie settingsAccept
Manage consent